On September 15, 2016 LAMP invited transportation planners from the City of Toronto and Metrolinx to introduce and discuss the upcoming Transportation Master Plan (TMP) process. Members of SETAC attended and posed questions during the Q&A session.

The Etobicoke Guardian’s Rahul Gupta wrote up an article on the event: 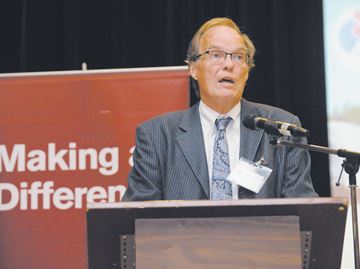 Wayne Murray just wants an answer to what he feels is a straightforward question:

When will new transit come to South Etobicoke?

“Why can’t they give me a date?” said the longtime resident. “When’s the earliest date we’ll see improvements to the Park Lawn and Lake Shore area?”

It’s an answer that planners and elected officials can’t seem to answer, to the continued frustration of Murray and fellow South Etobicoke residents who have watched new development spring up in the area, creating more traffic and congestion and transforming the “Sunday drive along Lake Shore” into rush hour conditions at all hours of the day – but little improvement in local transit.

“I get why people are frustrated when they hear study, study, study, but in this case there’s a huge need and a great opportunity,” said Milczyn.

With $9 billion in funding in place and the continued progress of new lines like the Eglinton Crosstown and Finch West LRT plans, not to mention unprecedented cooperation between all three levels of government, Milczyn insists change is happening.

“There are big projects which are going to transform the city, and they’re under way,” he said. “It’s not just talk. It will happen in South Etobicoke for no other reason than the need is really there. Nobody can deny the need.”

The city of Toronto recognizes the need, and at the meeting city planners Edward Presta and Robyn Shyllit presented an update on a study under way determining the future building of transit connections, as part of a master plan for Park Lawn Road, Lake Shore Boulevard, the Queensway to the north and Humber Bay to the east.

With a mind toward speeding up planning work, study head Presta said a report with recommendations will be presented to Toronto council for approval in 2017.

The study will include long term recommendations for improving local streetcar service, relocating the Humber transit loop and adding a dedicated lane for transit. Also under study is integrating new proposed waterfront light rail connections. The study is also looking into better integration of the TTC with GO and SmartTrack.

In the meantime, multiple community consultations are planned over the fall to satisfy provincial requirements and to get a good measure of community feedback.

But while it will likely be a decade at least – and that’s if the recommendations are approved by council in short order and funding secured – before major improvements are completed, Presta said there are “quick wins” to improve traffic in the short term, like adding more turn lanes at key intersections and adjusting signal timings.

This site uses Akismet to reduce spam. Learn how your comment data is processed.

Thank you for visiting SETAC.ca. We are a volunteer-led transit advocacy group based in and focused on south Etobicoke. Please browse our site to gather information on past and present transit issues.

You can also subscribe to our site below to receive an alert anytime a new post is added.

Receive an email alert when new posts are published.