Mimico and Long Branch GO Stations will be fully accessible by 2023 with electrified, 15-minute service by 2025.

The GO stations will be fully accessible with the ability to access each station from both sides with new tunnels. At Mimico, a new passenger drop-off and pickup area will be built on Manchester Street, with improved access to Long Branch GO Station from Edgeware Drive. 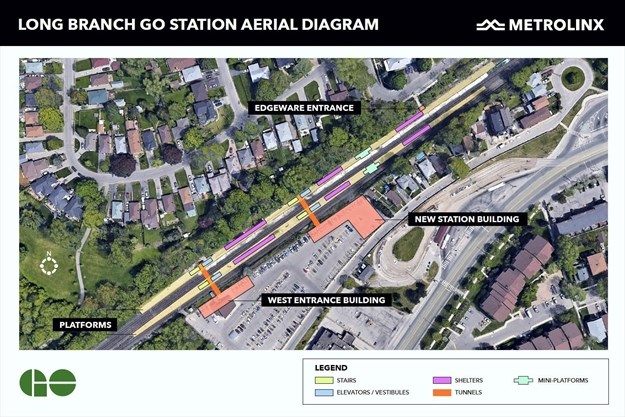 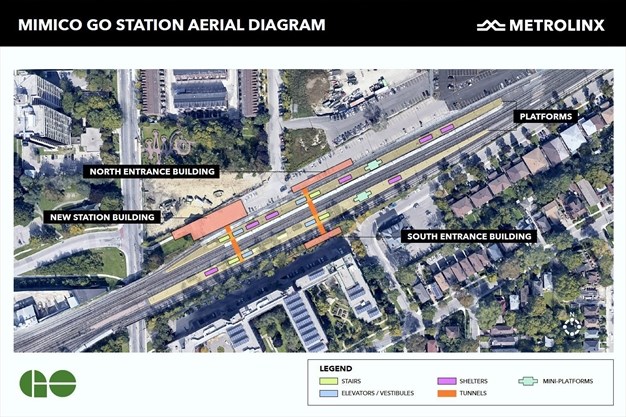 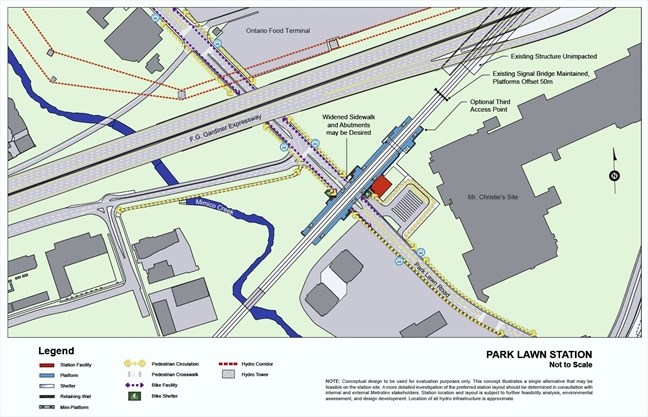 “One of the biggest things in getting these stations modernized is not only making them accessible, but also their expansion,” Metrolinx spokesperson Scott Money said during the afternoon open house session at Mimico Presbyterian Church. “The Lakeshore West line will eventually be 15-minute service. We need to have modern stations to accommodate that.”

Mimico Station was built in 1967, the year GO Transit launched. Long Branch Station opened in 1980. Today, GO’s Lakeshore West Line, which includes the Mimico and Long Branch Stations, is its busiest with 18 million passengers a year.

“It will be music to our ears when it gets done,” said Etobicoke-Lakeshore Councillor Mark Grimes, who represents the area. “It’s great. People are anxious to get this through. This city, it’s gridlock. We need to do something.”

In February, Metrolinx announced it would consider a Park Lawn GO Station after it didn’t make the cut in 2016 to proceed to the preliminary design stage.

“The Park Lawn station location has benefits that are greater than the costs, and therefore should advance to the next stage for preliminary design business case,” Metrolinx said in a report. “Transformative for the community” is how Grimes described it in a statement at the time, regarding the Park Lawn transit hub that incorporated GO and TTC services.

“As part of this review, a refined station layout and location at Park Lawn was found to be an increasingly strong transit investment,” Metrolinx said in its open house presentation.

If the Metrolinx board approves the project, the station will require funding and an Environmental Assessment before commencing construction.

Christopher Moore, president of the Mimico Residents Association, said Mimico residents’ top priorities for their neighbourhood GO Station is full accessibility and the creation of a south entrance, which requires a deal with Toronto Community Housing.

“Accessibility is residents’ No. 1 concern,” Moore said. “Metrolinx’s plans need to include a south station entrance. It’s important to the community since more people would be able to walk to the station.”

GO ridership at the Mimico and Long Branch stations is expected to grow exponentially in future. Today, Mimico GO Station sees approximately 1,200 riders a day, a number expected to skyrocket to between 2,000 and 4,000 riders daily in 2031. Approximately, 1,000 people take the Long Branch GO daily, but that number is forecasted to potentially double by 2031.

John Scheffer, a longtime Mimico resident, is a fan of GO Transit service. “I always highly recommend people who visit me to take the GO. It’s two stops and bang, you’re downtown,” Scheffer said. “We have the best transit in all of Toronto: buses every 10 minutes, the trolley (streetcar) every 10 minutes and the GO Train every 30 minutes.”

Anyone unable to attend Metrolinx’s open houses may view its presentation materials at bit.ly/2lX2lNB

This site uses Akismet to reduce spam. Learn how your comment data is processed.

Thank you for visiting SETAC.ca. We are a volunteer-led transit advocacy group based in and focused on south Etobicoke. Please browse our site to gather information on past and present transit issues.

You can also subscribe to our site below to receive an alert anytime a new post is added.

Receive an email alert when new posts are published.